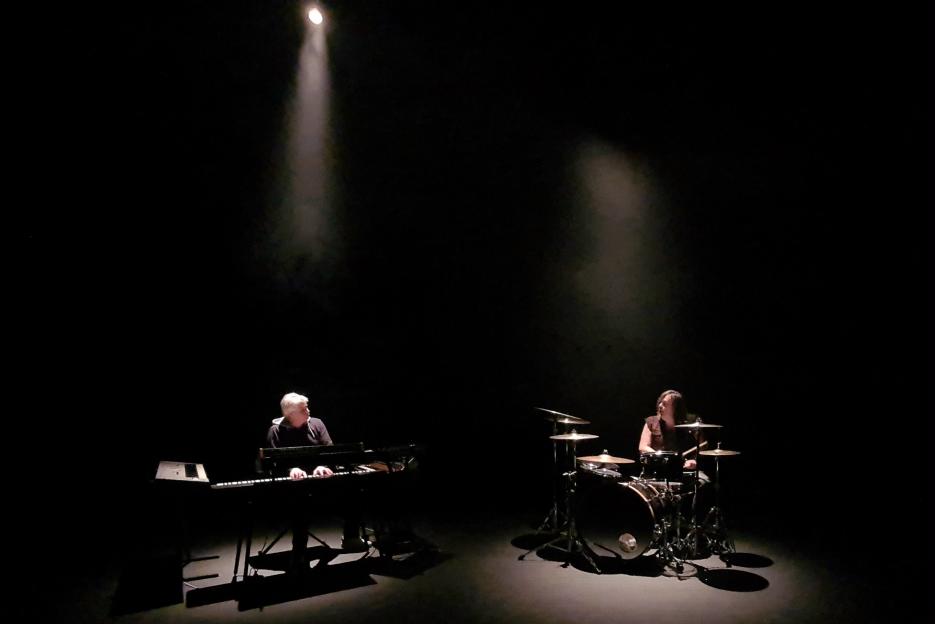 When it comes to creating music, some artists follow the trends of the market; others follow their heart and artistry!

Reegonetti Band knows how to unleash their talents, creating music that reflects their perception of reality, feelings, and connection with real life. Strong of a lifetime in music, drummer/singer Börje Reinholdsson and keyboardist Ronald Vikström shape their music, incorporating a unique blend of fusion, jazz, and prog-rock vibes to create their  trademark sound.

Today, at Planet Singer, we have the great pleasure of discovering more about these talented musicians with an exclusive interview!

Börje, Ronald, it is such a pleasure having you with us today at Planet Singer. Your journey with Reegonetti Band started many years ago, and just recently, you released two singles from the upcoming album. We are thrilled to know more about your and your story so, let’s start from the beginning. How did you guys meet, and how did Reegonetti Band come to life?

Börje – Well, the story actually begins in 1981 when Ronald had a band with my older brother. Ronald had set up his keyboards at our parent’s house and rehearsed with him on a regular basis. One day he shows up to rehearse, but my brother wasn’t there. So, we began to jam and actually composed our first song together that same night. We were both into fusion, jazz, and prog rock, so it was the music came quite naturally. We recorded a demo with five songs on it and had to have a name on it, so enter Reegonetti Band!

I have to say, from the very first second of your single “Reach for the Sky,” I had the feeling of listening to the best prog-rock of the golden era! Can you tell us more about this piece?

Ronald – Börje came up with the idea that he would compose a complete drum track that he would give to me. I then sat down and made the actual chords, melodies, and arrangements. After that was done, Börje wrote the lyrics and came up with the vocals. Quite a unique way of composing, but fun! It’s a nod to that melodic prog Yes is know for. 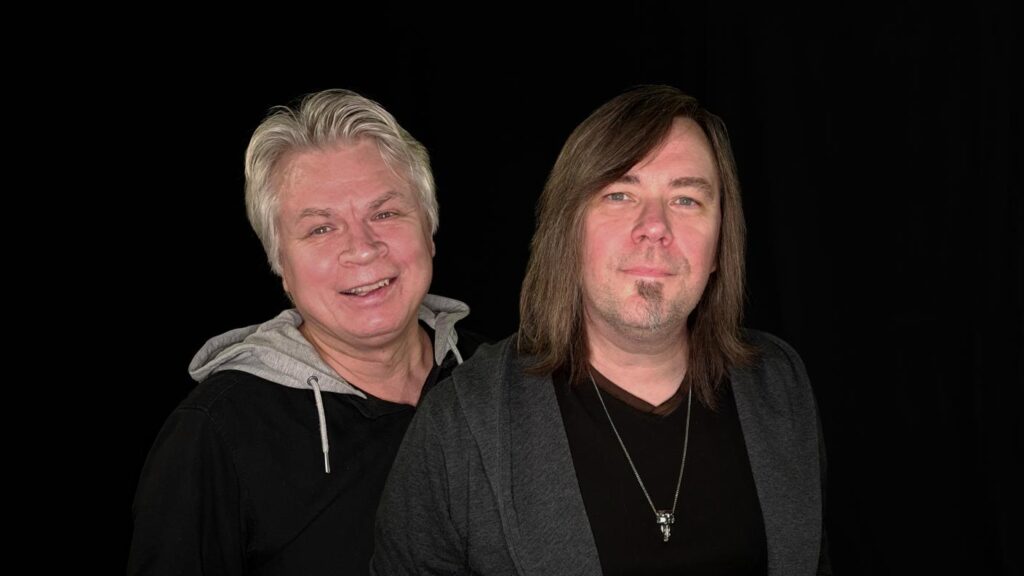 You guys are the proof that authentic music will always find its way no matter how long it will take. How did you feel when you started recording the first single after so many years?

Börje – It’s great to finally work with Ronald again! We have worked so long with separate projects over the years that we almost forgot how fun we have playing together!

Ronald – Yeah, we still scream at each other every time we talk over the phone and still have the same odd humor. This project has really revitalized our friendship.

You are both outstanding musicians, and the songwriting level in both tracks is incredible. Can you reveal your creative process?

Ronald – As a lot of the song ideas that we recorded for the coming album come from old demos, we have taken the time to listen to the actual core of those songs and bring the arrangements to a 2021-standard. Due to the fact that we got caught up in a pandemic, we had to rethink how to record the songs and work from separate studios.

Are the songs of your album pieces you wrote recently or are part of Reegonetti Band’s repertoire that have never been recorded before?

Börje – It’s a 50/50 deal there, I guess. We knew that we didn’t have enough old ideas to cover a whole album. We also wanted to see what kind of new music we could make together after all these years. Reach for the sky and Walking on Dean Street is two examples of new music. 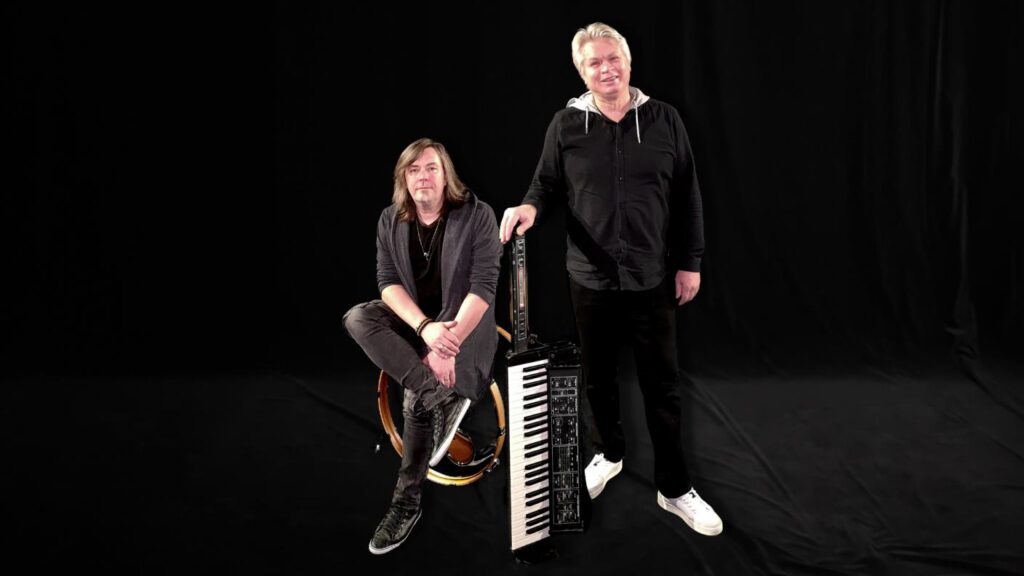 Despite the absence of guitars, your sound is incredibly balanced, full, rich, and engaging, proof of the excellent work during the arrangement, recording, and production stages. Have you ever thought about enlarging your line-up?

Börje – No, never. The unique sound we get is coming from Ronald and his keys. If we try to incorporate guitars and bass into the mix, it won’t be Reegonetti Band. But, we have actually worked with both a violinist and another singer to enlarge the sound for a couple of songs.

“Walking on Dean Street” what a song! Memorable melodies and captivating lyrics. What’s the story behind this song?

Ronald – The idea came from Börje, who has had this song laying around for a couple of years. He presented the idea of a big orchestral piece without drums. So I then did the arrangements and orchestrated the song.

Börje – The song is a tribute to the small town of Arvidsjaur, where we both grew up.

Börje – Hmmm… I guess a lot of inspiration comes from old prog music like U.K, Yes, Jan Hammer, and that kind of grooves. But we also take inspiration from books, films, and our own crazy ideas!

Even though your sound hasn’t changed much from the band’s early days, I find Reegonetti Band’s sound very fresh and fluid, thanks to the excellent balance in the sound choices and the incredible production done on the two singles. Can you reveal some news about how the album will sound like? Will you release another single or Ep before the full-length?

Börje – The album is quite eclectic and contains both instrumental tracks and tracks with vocals. The core is prog-rock, but we have tracks that lean more towards folk music and electronica. It’s not an easy listening album, that’s for sure! Nope, no more singles. Next up is the album “Exploring the unknown” that comes out June 30th.

Are you planning to play live anytime soon?

Ronald – We really would like to do that! But first of all, we need to find a way to make this music sound great on stage. That’s quite a challenge with only two guys in their mid-50s!

If your sound remained true to its origins, the music industry has changed quite a lot during the past four decades. What do you think about the contemporary music scene? Any artists you like? Any you would like to collaborate with on a song?

Börje – There are some artists out there that I like. Lonely Robot and Steven Wilson are two examples that I really appreciate.

Ronald – Well, we have already started talking about doing another album as this was a really fun process. But first of all, we need to release “Exploring the unknown” and take a break.

Guys, it was such a pleasure having you with us today. We are sure your music will inspire so many artists that are just starting with their musical journey. Is there anything you would like to say to our readers?

Börje – It’s never too late to do what you love! Look at us. We waited over 40 years to do this album, and finally, the stars aligned! 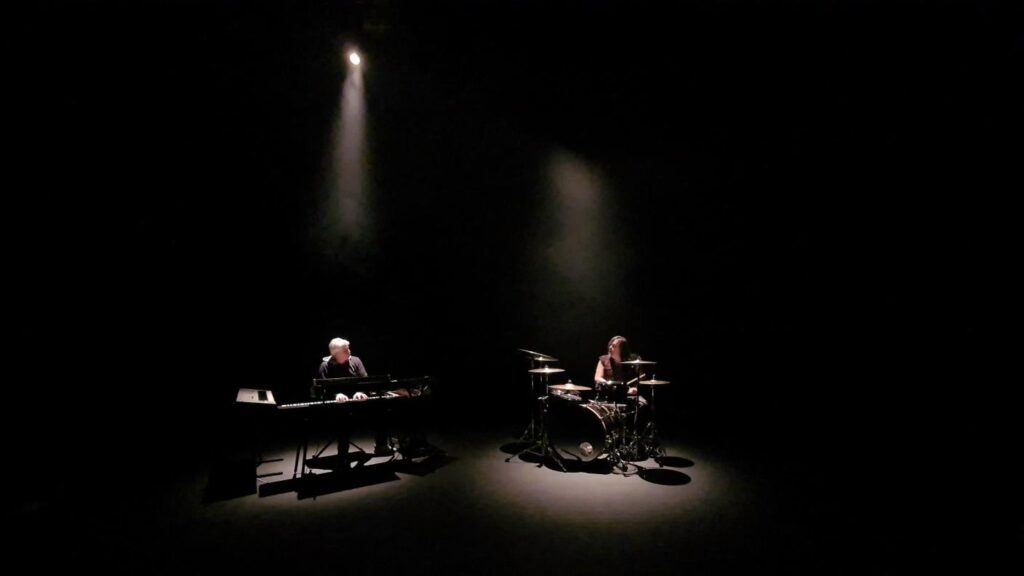 Check the links below, discover more about Reegonetti Band and their music, and don’t forget to add their tracks to your favorite playlists!

Reegonetti Band, first formed in 1981 by drummer/singer Börje Reinholdsson and keyboardist Ronald Vikström, has always been considered “The odd ones out”

The music was complicated, long, and far from your average pop songs. The instrumentation was lacking real guitars and bass. Tio add fuel to the fire, the band didn´t play live for a long time due to the fact it was too complicated to translate the music for stage performance

You could say that Reegonetti band had an uphill climb from day one. As the band was on the verge of landing a record deal back in 1983 things fell apart because both Börje and Ronald got caught up in other bands and projects. As Ronald started to compose and arrange scores for film and theaters Börje had a long run of both solo records and different band collaborations.

The band never officially split but nothing creative was done until 2012 when a new track was recorded. After that, it took another 8 years before Ronald and Börje decided that it was time to make that album they once started to do.

Nothing has changed. The music is still complicated, long, and far from our average pop songs. The instrumentation is still lacking real guitars and bass.“The odd ones out” continues the journey the started 39 years ago.

The singles “Reach for the sky” and “Walking on Dean Street” is already out on download and streaming.

Charlie Burger opens up to his fans, answering 10 of their most asked questions!

Exclusive interview with talented Norwegian artist Pernille Wensel about her latest single, “Burn,” and much more!